I Wish I Had Better News Today

This morning I had CT scans of my chest, abdomen and pelvis to see the status of the tumors in my lung, liver, and bones.  I’ve been feeling better the past week and the hope was that the chemotherapies I’ve been getting were shrinking my tumors.  Wynn, Nathan, Nina and I then went to see my local oncologist late in the afternoon to get the results of my scans.  Unfortunately, I did not get good news.  Although the primary tumor in my lung shrank, the lesions in my liver and bones are bigger and more numerous.

Next Steps:
So the sobering reality is that I need to set myself up for clinical trials, which are therapies that are offered only under strict research protocols. I will start a new chemotherapy next Thursday, which will work to preserve my liver.  In the mean time, I will have another liver biopsy, probably tomorrow, which will be tested for information needed to help my doctors choose the best chemos to try next and help me decide the best clinical trial to choose down the road.

Given that I am likely going to enter a research protocol at some point, I thought I’d let you know that my family is participating in Cycle for Survival, a fund raiser for Memorial Sloan-Kettering, a nationally known cancer research center.  Along with other family members, Wynn, Nathan, and Nina will be cycling for me at the Equinox Fitness Center in Chicago on February 9th, to raise dollars for researchers who are looking for new therapies for all cancer patients, including me.

This link will bring you to my family’s page if you’d like to make a donation:

Thank you to all our friends and family members who have been an incredible support system to me, Wynn and Nathan and Nina. We love you all!
Posted by Luna O. at 7:47 PM 6 comments:

He Said Just the Right Thing


This past weekend, one of my oldest and dearest friends came to visit me.  Anita and I met when we were 4 yrs. old at Sunday school.  [Along with our mutual friend, Stacy, we have known each other for 50 years!]  Anita and I talked, laughed and cried.  Oh…and we shopped.  We both like Eileen Fisher so we went to the outlet before she left to drive back to Iowa.  While there I found a pair of boots that I really liked and wanted.  The only problem was, even though we were at the outlet, they were still too expensive for my blood.  Anita did her best to talk me into getting them.  She even told me of a specific outfit I have that would be great with the boots.  But, I just couldn’t do it and I walked out without them. 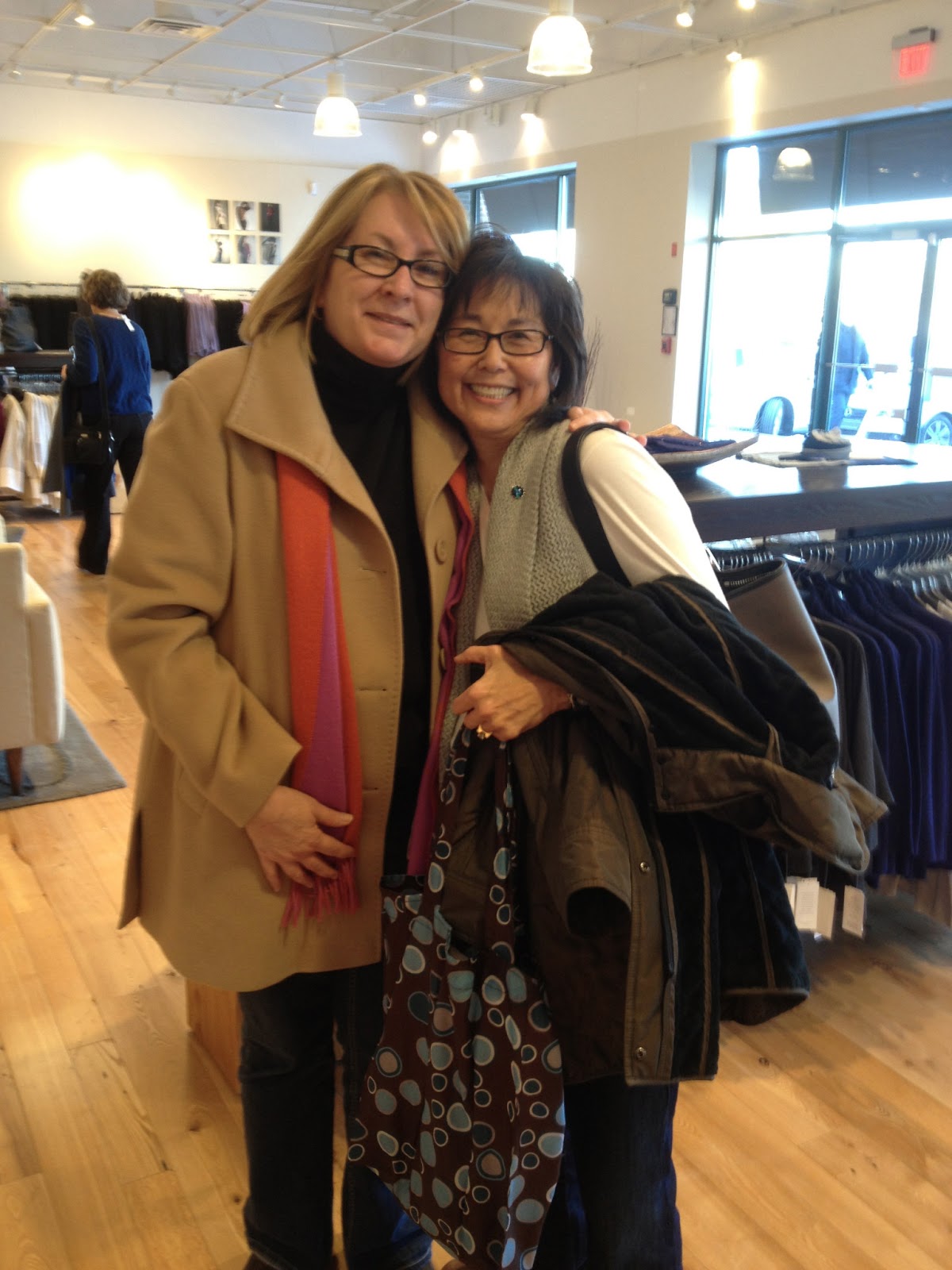 Shortly after saying ‘good-bye’ to Anita and leaving the store, Wynn called me while I was driving home.   Here’s how that conversation went:

So, I turned around and bought them.  Aren’t they cute?! 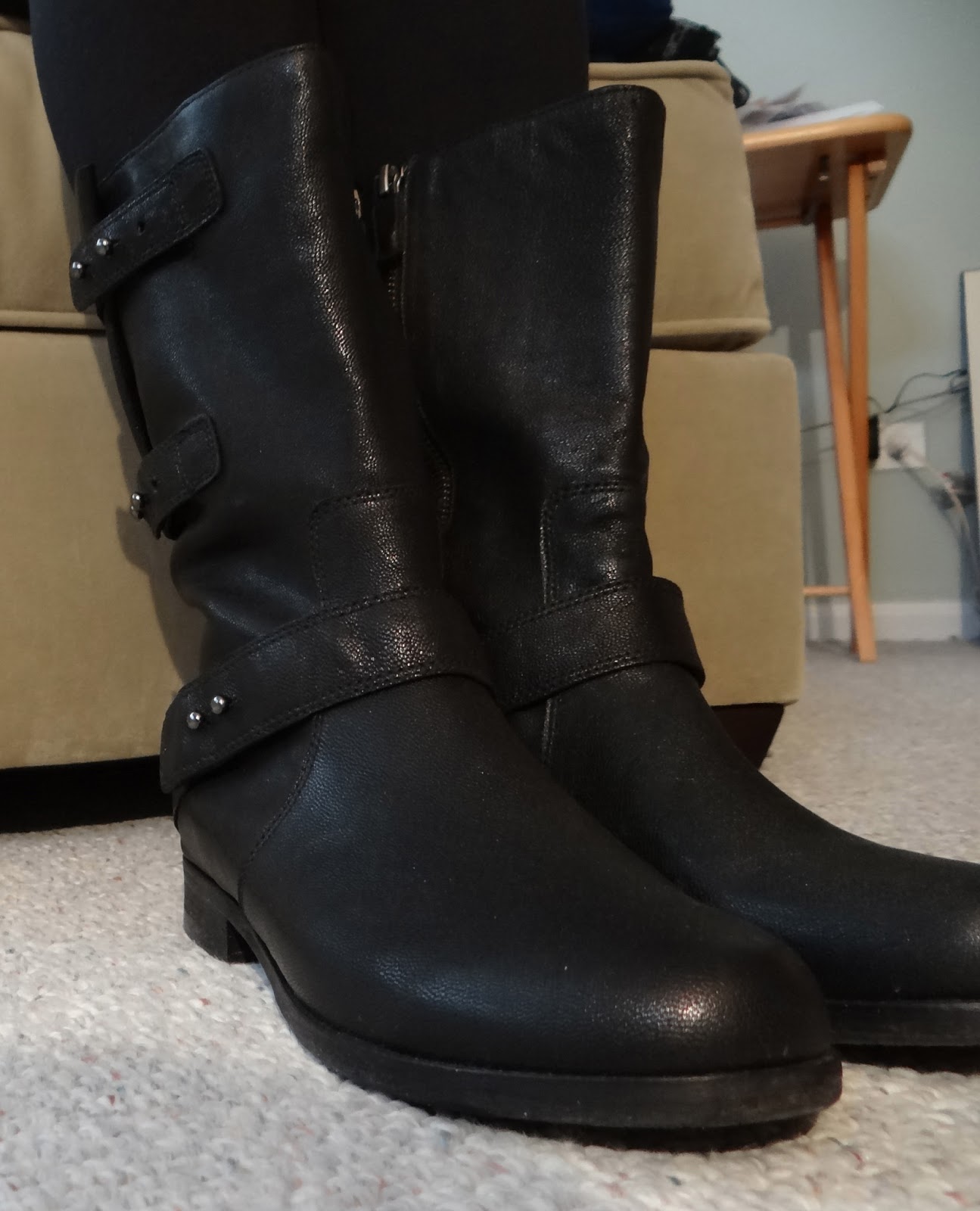 Tomorrow is my scan...I'll be in touch.

Sorry about any difficulties readers have experienced trying to leave a comment on my blog.  I changed some settings so I hope that takes care of the problems.  Please leave your comments...I love hearing from you.

Today has been a good one.  The first two days after my second chemo session weren’t bad at all, but days 3-5 were pretty challenging.  The nausea and fatigue were indescribable.  However, today, I feel much better…only mild nausea, minimal fatigue, mild liver discomfort and minor bone pain.  I was hoping that after my second chemo session I would be able to figure out some sort of pattern, but so far, it seems like I need to plan to be out-of-commission for about 5 days afterwards.

It’s my understanding that chemotherapy treatments are cumulative, so I can expect to have a longer recovery with each treatment.  I’ve been told that the post-chemo liver discomfort may be a ‘sign’ that the medications are working on the liver tumors…so I suppose I should be glad :/

Two good things:  My hair is still on my head and the fuzzy spot in my right eye seems to show up less frequently.

Next week I’m scheduled for CT scans to see if my chemo treatments are helping.  I probably won’t blog until after that.  Thanks for reading, everyone.
Posted by Luna O. at 2:55 PM 2 comments:

A couple of weeks ago I noticed that I had a small area in my right eye that would sometimes get fuzzy.  It comes and goes and initially I thought I had a smudge on my glasses.  After realizing that something was going on with my vision, I mentioned it to my oncologist.  He reminded me that one of the medications I’m on, Avastin, decreases the blood supply to my tumors and one of the side effects is vision changes because Avastin can act on the vessels in my eyes.  He recommended an evaluation with an ophthalmologist, which I did last Tuesday.  I’ve been found to have what are called cotton-wool spots on my retina, which are white puffy areas of inflammation.  Although seen in diabetics and those with uncontrolled high blood pressure, a rarer association is in folks with metastatic cancer.  That would be me.  The ophthalmologist didn’t think it was associated with Avastin because the vessels on and around my retina look healthy and Avastin is used in the eyes of diabetic patients.  So the thought is that if my chemotherapy is working, these cotton-wool spots may arrest or even get better.  However, if the chemotherapy doesn’t work, I may slowly lose my vision.  Nice, huh.  Could I please catch an f-ing break!  It’s taken me a few days to write about this because of all the shitty information I’ve received about my cancer, this one hit me pretty hard.  I have a follow-up appointment with my ophthalmologist and may see a retina specialist sometime soon.

A couple of days after I learned about my eyes, I was told that my liver enzymes had improved – which gave me/us hope that my chemotherapy is working.  If I had to guess, I think the fuzzy spot in my right eye that comes and goes, hasn’t been there as much – another good sign.  Please continue to wish me luck.

The other good thing is that my hair hasn't been falling out yet and I postponed my wig pick-up for another week.  So by my count, one bad, really bad, piece of news about my eyes gets balanced by good news about my liver enzymes and no hair loss yet.  That's one bad to two good.  I win!

[BTW local friends and family:  The ophthalmologist says that my vision hasn’t changed and that it’s safe for me to be driving.]

Among the many tests I have had and that have been suggested or recommended to me is one called a pan-cancer test.  So…going back to the gene mutation testing I had early on, let me explain my understanding of all this.  (Keep in mind I might be full of crap.)

In the past few years there has been a lot of research and excitement about tumor mutation testing.  A simple explanation:  Tumors have their own genetic information that is different from our other healthy body cells.  Researchers have found that some tumors have gene mutations, (alterations in the normal sequence of DNA), which make the cells cancerous.  Researchers now know how some gene mutation(s) change a normal cell into a cancerous one…one that grows and divides too fast, doesn’t function as a normal cell, and/or that doesn’t die away properly when it gets too old to function properly.  Researchers have also found what are called “targeted therapies”, which are medications (not chemotherapies) that go right to the tumor mutation and essentially correct the mutation allowing the tumor cell to “act” more like a normal cell should.

These targeted therapies are pretty cool.  They are one-a-day pills – and for example in my case, if I had had the EGFR mutation that I wanted so badly, the targeted therapy would have helped shrink my lung tumor and the metastatic disease to my liver and bones.  Sounds almost too good to be true, right?  Well…you’re correct.  I understand that targeted therapies, like chemotherapies, don’t work forever.  Much like bacteria that mutate in the face of antibiotics so that the antibiotic is no longer effective, cancer cells change their genetics so the targeted therapy, (or chemo), will no longer retard the growth of the cancer.  Targeted therapies can work for as little as a few months, or their effectiveness can be measured in years.  I don’t think anyone knows yet why some people can benefit from a targeted therapy for many years and others for a much shorter time.

So far, I’ve had tumor mutation analysis for the most common mutations associated with adenocarcinoma of the lung, but there are a few labs out there that will test my tumor for all known gene mutations by using a newer technology called Next-generation sequencing.  These labs can test for ~280 different mutations, for ~$5,800-6,000 and results take ~3-4 weeks. (Insurance coverage for this testing is “iffy” at best.) The results will tell me about any mutations they find in my tumor, what therapies are available (both FDA approved and not yet FDA approved) and about any therapies that are only available through a clinical trial.  The other piece of information I would learn is if I have a mutation that is resistant to therapy.

So here’s my dilemma:  Do I want to know if I have a tumor-type that doesn’t respond to currently available therapies?  I suppose some folks would want to know that information and then opt for only palliative care – and maybe even skip the chemotherapy.  So far, my team of doctors has advised me to wait on this testing.  One doctor said that I should save any tumor tissue in case I need it in the future for a clinical trial.  The other doctor said to wait because in the oncologist’s community, this testing is controversial since a clear treatment may not be known for many of the mutations that may be found.

For now…the decision to have this testing is ‘on hold’.  So…WWYD?
(No response is being requested here…it’s just food for thought.  And remember...I might be full of crap.)

Picking Out a Cranial Prosthesis